We had expectations when I was a kid. I used to watch rockets on TV, blasting off fairly regularly. We got to the moon — anything was possible, so we thought. Looking back, that was a bloody miracle. Star Trek was more future thinking than NASA. Roddenberry and his crew were the real thought-leaders, as were Ellison, Spinrad, Philip K. Dick. They were the imagineers and in their world, gadgets were useful, terrifying, real. Spinrad’s assassin with the molecular filament line in his thumb gave me chills; and who can forget Baron Harkonnen and his suspensors?

The sci fi writers of the 60s had moved past the clunky Flash Gordon era, really started to break out and get a little weird. Whereas the 50s were fueled by whisky and nicotine, by the 70s we were riding a train started by the Beats, then driven by the likes of Leary, Burroughs and Dass. By then we had the highly sexual dope-smoking Forever Army of Haldeman, Moorcock’s dour Elric, and then Star Wars — a bit stodgy in social mores and pace, but man they had robots and lasers and trippy tracking devices that could drop the dime on you through hyperspace. We marveled at communicators, skinsuits, powered armor, Genomic alteration made its play, and gave us the creeps; we were more comfortable even with the jacked-in chipheads of Gibson. From Dick Tracy to Star Wars, we could imagine technology doing amazing stuff.

We’re not there yet. Most of tech is pretty damn dumb, though I see flashes of brilliance here and there. Self-driving cars are amazing — I’ll give them that, Musk may be right, and we’ll outlaw human drivers. Someday. But for personal gear we’ve nearly caught up to the 1950s sci-fi. And that’s where Android Wear comes into play.

I’ve got one of those, it’s the watch in the photo below, the Moto 360. That was taken at dinner in a very loud restaurant — cement floor, wood walls, no tablecloths, everyone there trying to talk over everyone else. As we chatted, various subjects came up — who was in what movie, what caused meningitis, etc., I was able to ask Google Now to find facts for me, to text folks, and generally be useful. The vocal discrimination was fantastic and Google Now managed to get the question right most of the time. When texts came in the wrist buzzed, and though I’m no social media butterfly I could keep a couple threads going at once, and not seem to drop out from the people I was dining with. Talking to the watch was not as weird as I expected. We talk to our phones, why not our watches? Beats the hell out of sending texts with an onscreen keyboard. I never have gotten comfortable with that and autocorrect is deadly.

The Moto 360 is no C3PO, but between Google Now and the automatic filtering on the watch, I’m able to stay in tune with my various interests and more importantly, with my family. That was always a struggle – I have a demanding job, working nights sometimes, weekends often, and frequently I travel. Knowing who was going to what competition, or that movie night was coming up, or the wife’s book club was due to take over the living room always used to catch up me, find me on the back foot, and to my better half, who manages all the domestic activity, I was simply out to lunch. That was before I got her to use Google Calendar, synced that to my account, and now presto, everything that comes up on her calendar pops up on the watch. No way I can miss thigns now. Usefulness!

A few days ago I was on a walk. My son, off at college, loves to text. Me, I’m from the phone generation. Why not just call, if you want a conversation? Whatever, he texted, I talked (to the watch, of course) and he was never the wiser.

To me the power of the wearable is putting helpful intelligence at our beck and call. Freeing us from irritations. Some takeaways:

Given the quality of the speech recognition, fairly smart filtering and guesswork of Google Now, I can see a bright future for Wear and I’m sure Apple will have a suite of helpful tools for their watch. Technology is finally getting good. Maybe next, we’ll send someone to Mars. 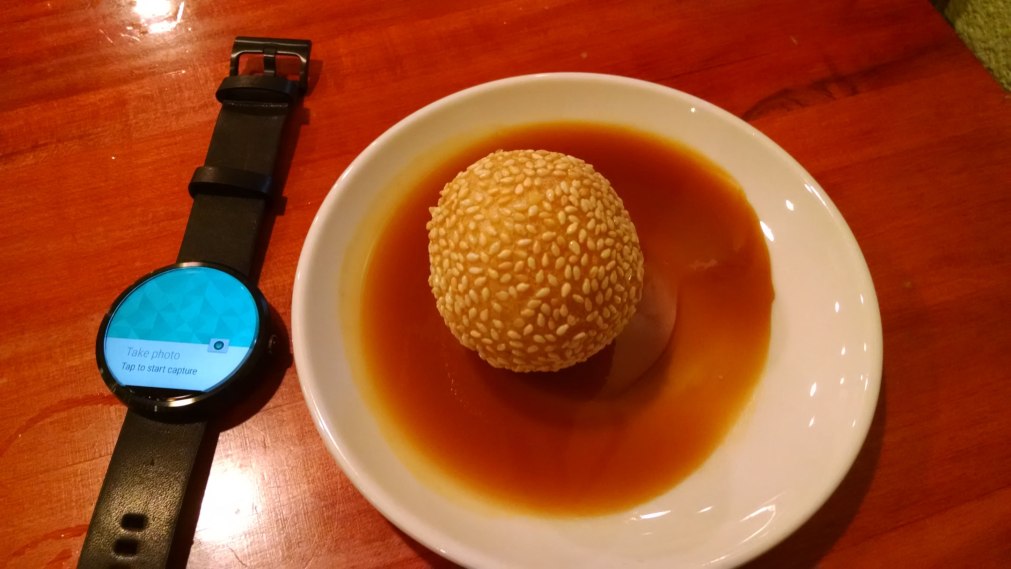 Technologist and communicator. Into technology, jazz, Formula One, sci-fi and any good writing about real stuff.
View all posts by H.W. MacNaughton →
This entry was posted in AndroidWear, Technology and tagged Android Wear, Moto360, scifi, Spinrad. Bookmark the permalink.

3 Responses to Android Wear and Smartwatches: Finally the future