What could be a greater test of the usability of Android Wear than a hectic trip to the most hectic place in America – Manhattan? We’ll rate the usefulness of the OS and share the resulting Battle Damage Assessment of the hardware.

This is the crucial test for Android Wear: in a strange city, did it make my life easier, or needlessly complicate it? Did the battery make it through? Was I hung up with any data issues in the notoriously cell-unfriendly big city?

Let’s start off with the basics: keeping in touch. My Wear device linked to a HTC One which is my personal phone. I left my work phone at the hotel. It was a mad trip—we walked 65 miles in seven days, visited five major museums,  took in two Broadway shows and went to three fancy ‘destination’ restaurants (hey, it was a big-number anniversary…we blew it out). All week, I never missed a call or text from my kids or my mom. I could read emails from my airline and my dentist. Nice. Twitter and WordPress kept me apprised of blog-related activity. On-wrist notification is superb when you are on a crowded sidewalk or subway and you don’t fancy having your $500 phone knocked to the pavement by bustling commuters. +1 point.

Busy as bees we were, and this isn’t even all of the flowers we visited.

We went to a lot of places, every day, and the weather was great (in late June? wow!) so we walked a lot. We had to see Central Park (big!), all the big department stores, FAO Schwartz (before it closed, sad face), Central Park, Dean and Deluca’s, some nutty place called Momofuku, the High Line, several Villages, it goes on. My approach: ‘favorite’ the places we panned to visit the night before for quick navigation–Google maps is superb for that. Next day, I would click on the fave, click the walking man icon, and throw the phone in the pocket. The watch guided. Tres cool. +1 point.

What’s the weather up there?

Face it, June in NYC, you don’t expect it to be nice. After being in a museum for four hours it was great to know what the weather was doing out there, if rain was imminent (we only got hit once), what was happening tomorrow (while we huddled over sandwiches in the tiniest Pret A’ Manger ever). +1 point.

I got the 5.1.1 update just before we left, so I was able to do the wrist flick to activate the screen, then the slow roll and flick to move through cards. (See video here). But unlike the techno buffalo reviewer, who tested the feature sitting on his butt, I was on a subway, holding on for dear life. Being able to scroll through notifications one-handed is cool and I have used that feature a number of times—on walks, while carrying a water bottle, on my bike, etc. Nice move, Wear. We still need a motion to dismiss cards. See Annoyances. +1 point.

Keeping the phone in the pocket

The fact that I often missed notifications before I got my Moto360 was a huge issue for me. I have a hectic job and I felt bad missing out when my family needed me. And let’s add another aspect to this—able to view commo and even respond while keeping the phone in the pocket. My kids love to text, I find it annoying, but with the Coffee app, I can speak back my response or use a whole raft of resets. That’s a great app.

Add to the already-recognized advantages of Wear, in NYC I was worried about crime, more than in my town, as I had last spent time in NYC in the late 80s. It’s different now; New Yorkers told me Rudy Giuliani was known as ‘Benito Giuliani’ and they complain about some of his methods, but damn, did he clean up the city. Nevertheless, there is still crime, and some of it is new: Apple picking, for instance. I don’t have an iPhone but the HTC One M9 is big and shiny, and I was glad to have it in the pocket for communications, maps, temperature, time. +3 points.

I use Moto Body to keep track of my activity level. I do wish it would notify me when I spent too much time on my butt, like now, writing this blog post. However, it does do the job or tracking. Knowing we did over 26,000 steps in one (deathmarch!) day was awesome, and knowing our total mileage at the end was mind-boggling. Moto Body needs better integration but as it is far more accurate than Google Fit, it gets the call. +1 point. 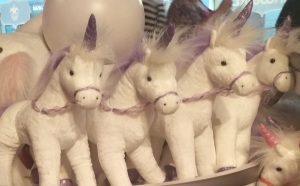 Yes, there are some annoyances with Wear, fan that I am. Like when I want to see what time it is and the watch is covering half the screen with notifications (this is where the wrist motions help). Email is tough as it takes a long time to scroll through them all. It would be great to have a wrist action to show the watch face right off. Also, the watch-face selection menu gets activated when I fold my arms, which is annoying. Wear needs ‘arm rejection’ (like wrist rejection on a tablet). I used theater mode sometimes, just to tame the watch. -2 points.

Android Wear total: +6 points. It gets a creepy unicorn from FAO Schwartz. Hey, that’s not so bad. Next up is the hardware section, where all is not fairytales and bunny rabbits.

This is where I talk about the physical side. We took a beating in NYC. There is scaffolding everywhere, lots of stone balustrades, subway cars, and me, a bit peripatetic at times.

Somewhere along the way, the Moto got a crack – two of them in fact, and one pretty big one. Here is where I am a bit disappointed. I had heard of folks using third party bands with the 360 and getting cracks, as they were too thick. I chose the Tylt band, as it was ‘made for the Moto360.’ So, is this damage the fault of the band, or just a damage from where the watch was grabbed when it got hung up on a doorway? I don’t know. I have no idea when these cracks occurred. It sucks, of course, and I’ll soon be posting my experience with Motorola addressing the problem (spoiler: quickly, with no questions).

Unfortunately, even if I can fix this thing, I cannot put the stock band on and re-test–I can’t afford another trip to NYC. I hate being unscientific, so there you go, anecdotal evidence. Anyway, -5 points for the Moto having a glass jaw, as I faced time without my watch to get this fixed. I missed it!

Shrugging off wear and tear

On the front of the watch, things held up better. Apart from a chunk out of my screen protector (that was there before we left — me whacking it on a doorjamb), there was little damage. The Moto360 is stainless steel and the black coating hangs on pretty well. +1 point.

The Tylt band held up very well. You can see some scratches on the end link, which is not surprising considering all the stonework it came in contact with as I got low and steady to take pictures. I have far more expensive watches with as much wear and tear from just going to work and back. Also, it was very comfortable (moreso than the original leather), even when things got hot and steamy. Both on the sidewalk or the subway, it was never slimy like some rubber watches. However, the latching link on the end of the strap, which is supposed to fit into the band as it wraps around, gets knocked loose too easily. I found myself reattaching it a couple times a day in rough and tumble Manhattan. So, good on them for using a resilient stainless steel, but the link retention needs work. Even Stephen there.

I enjoyed wearing the Moto360. I rarely missed having my phone out–and when I did have it out I felt exposed. It’d be a big chunk of dough to replace it. The watch was fun, and useful, and good enough looking it even went on my wrist to a Michelin-starred restaurant. The big cracks – not so cool. I have to deal with that and will report back. The Tylt band may or may not have played a part. 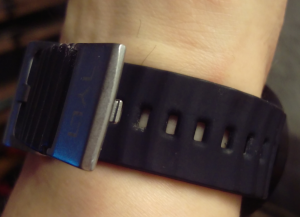 This link can flip up off the band.

Technologist and communicator. Into technology, jazz, Formula One, sci-fi and any good writing about real stuff.
View all posts by H.W. MacNaughton →
This entry was posted in Android, AndroidWear, Moto360, Reviews, Technology and tagged Android Wear, Moto360, New York City. Bookmark the permalink.