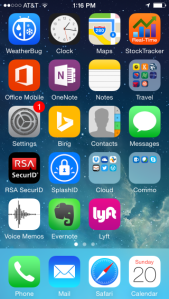 N.B: When I say below I was an early adopter, I mean it. I loved the Mac–I subscribed to MacWorld and MacUser. I haunted MacOrchard in Berkeley and got my first Mac-based consulting jobs there. They were fun when they were the underdog…

I’ve been amused by the Apple reality distortion field over the years. Apple products get great press, they do effective marketing (for some; it turns me off), and they sell boatloads of stuff. No doubt about that. But they get a relatively free pass when other companies get nitpicked. And in some areas, they’ve been playing catch-up for years and never get called on it. I’m not the only one to notice:

Apple deliberately take advantage of consumers’ poor knowledge of other tech products (you can’t blame them, the market is overwhelming and moves at a ridiculous pace) to convince them that iPhones are at the cutting edge of innovation. I get it. It works. But tech writers who’ve been doing this longer than me should know better. None of this is new. Apple is just better at selling it than any of the other manufacturers.

Holly Brockwell, from Gadgette.com. Worth a read!

Case in point: did you hear in Fall 2014 that big phones are now fantastic. Did you agree? Well, if you were an iPhone user before the iPhone 6 was released, you probably didn’t. That’s because most mainstream reviewers had agreed that big phones were ridiculous, unusable, laughable. If you think I’m exaggerating, there’s a great compendium on Digitaltrends, on how reviewers’ opinions have changed since the iPhone 6 and 6s release–and now, big phones are great. Even perfect! Why the 180-degree change? Are these people paid? Brainwashed? I don’t have a good answer for how the distortion field works. Even the reviewers admitted they didn’t know why big was good when it happened for Apple.

Oh yeah, and widgets…a huge innovation from Apple. Years after they were on Android.  And still done in a half-hearted way. Buried in the notification center, and very limited in scope and appearance. We could go on…

Finally, how about that huge new iPad? Looks a lot like the Surface 3 Pro. But the press has been unremitting in their bashing of the Surface. For example, this piece which posited that since Microsoft had lost money on the first few iterations of the Surface, the Pro 3 would fail. Er…no. It hasn’t. If it had, you never would have seen the iPad Pro. They even copied the name. What Microsoft gets scant credit for is pioneering a new form factor (full-powered tablet) and a unified touch/mouse & keyboard computing concept that Apple still hasn’t even taken the first step towards. Think, is there even a touch screen MacBook yet?

It takes balls (Ballmer?) and a lot of cash to burst into an established marketplace and try to create a new product that challenges two existing product categories–tablet and laptop–at the same time. Microsoft had both cash and balls, and gets very little credit for its innovations from the press, despite very positive reviews from Surface owners. (I’m one, for disclosure’s sake.) Apple has some great arrows in their quiver, and they get copied a lot (hello, Samsung) but in the last 10 years Apple in turn has often copied other companies. That’s the way innovation works. The difference is when Apple does it, they get glowing reviews.

Is the difference in mindshare down to marketing? (‘High resolution’ becomes ‘retina’ — brilliant!) I don’t think so. It’s more groupthink within the press, in my opinion. It’s comforting to run in the pack, and the pack follows the leader–which is Apple, in consumer electronics. The pack has changed over the years. Some of us remember ‘you’ll never get fired for buying IBM.’ The Mac was once dismissed as a toy. But changing ideas so broadly ingrained requires disruptive technology that renders the old order irrelevant (think iPod vs. Walkman). That hasn’t happened yet.

Thus, we get more of Jony Ive gushing over stuff that is, well, kinda meh advances in an already-mature product. Glass backs, aluminum backs, straight sides to curved, amazing stuff. Meanwhile, Samsung stuffs an ultra HDTV into a smartphone but who cares?

I met Steve Jobs when he came to our little Silicon Valley startup at his nadir. (We were actually using NeXTSTEP.) He addressed our entire staff in a windowless room in nondescript digs in Redwood Shores (if memory serves). The entrance was up cement stairs, and there were were big piles of dirt outside.  It must have been mid-1995, and Jobs admitted that he’d “failed to create the next great computer platform, and even the next great OS. Now we just want to own the object layer.” He was talking about OpenStep, a joint venture with Sun. He went on to take questions from our management team, which he answered with some nasty put-downs which will resonate with me to this day. Yeah, it was at his low point, but the biographies make it clear, this was typical for him. I don’t like bullies, and people who don’t know how to treat other folks get no respect from me. Jobs was lucky enough for his genius to fall on the most fertile field in history and saw huge success. He could have shown some noblesse oblige.

And he wasn’t always perfect. His calls on large phones and small tablets were wrong. He was quoted on the 2010 Q4 conference call “SJ: New crop of tablets will likely be DOA. Too small. Will increase size next year, abandon customers and developers who went 7-inch.” (1) Until the Galaxy Tabs and Vivo Tabs and Nexus tablets made it clear there was a market for them. Then came the iPad Mini. Obviously, he was wrong on large screen phones, too.

The man left a nasty taste in my mouth, but I’d already abandoned Apple, having been an early adopter (Apple IIc in 1985, a Mac 512e a year later) because a) Macs were crazy expensive and b) the ‘System’ was still single-threaded, so it could only do one thing at a time. This killed real multitasking from both usability and programming. By the mid-90s, Win32s was out and we programmers no longer had to worry about segment offset programming or event loops that give other apps time to run. I ditched my little Mac Quadra with some sadness but never looked back. Windows 3.1 was a big hit and the Win32s API promised better things for programmers.

It takes more than a pretty face…

Pretty is good and Apple does pretty, absolutely. But the nerdy kid with glasses has as much to contribute and the contributions of some un-sexy companies make the world go round. For instance, some of the Win32s programs (a 32-bit API that ran on 16-bit DOS) written as far back as the 1980s are still usable today on Windows 10 (I use a couple). Companies still run FORTRAN apps. Think about that. How many times has Apple abandoned its user base, and all their programs? System 7, OSX, the change to Intel CPU. Most of my Mac documents from back then are unreadable by modern Macs.

Say what you want about Microsoft, those of us who know programming understand their achievements. Their marketing is often off-key (dancing, flapping Surfaces?!), I’ll give you that, and they have bugs, but they write millions and millions of lines of code per year and have driven business since the 1980s. Where Sun wilted in the Linux onslaught, they’ve flourished. They were the biggest target when viruses exploded, and though everyone was vulnerable, the biggest target gets the most most arrows. The impression the masses have gotten from those days is that ‘Microsoft sucks,’ but the savvy know the real deal. As for Google and Android, more on them in an upcoming post.

What I’d like to see from Apple is acknowledgement that they’ve taken ideas from others. They admitted internally that ‘consumers have shown’ preference for larger screens. IOW, someone else produced a product that people preferred. BrandX had gotten there first. One day, I’d like to hear a breathless Jony Ive voiceover say “when we saw this feature on BrandX, we thought the idea was perfection. So we copied it.” As if. At least they can lose some of the pomposity.

Technologist and communicator. Into technology, jazz, Formula One, sci-fi and any good writing about real stuff.
View all posts by H.W. MacNaughton →
This entry was posted in Android, Technology and tagged Android, Apple, Microsoft, NeXTSTEP, Steve Jobs, WIn32s. Bookmark the permalink.